Time for an October update on the swallows project, a new installation piece for the upcoming exhibition 10 Artists/ 10 Pieces at the Tremaine Art Gallery in January 2018.

The block is up to 7 swallows, roughly divided into 3 sizes and making sure that each size has birds going in both directions.  I think I now have the minimum variety I would need to get the space stretching effect I'm hoping for by hanging the largest in the middle and decreasing the size as the piece extends toward the ceiling and floor.

*However - as we can see, there is still some room on this block. I think what I'm going to do is make some new templates and in each size have one bird in a unique pose.  Time-management wise, I think it's better to spend a little more time carving now to have fewer press runs and instances of gluing the backing papers. 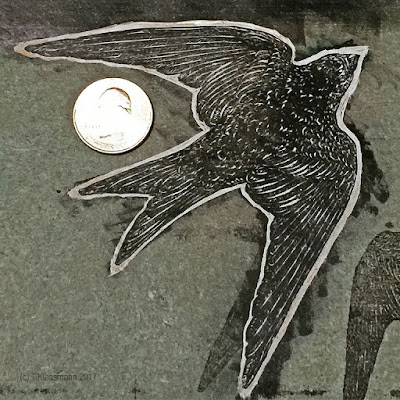 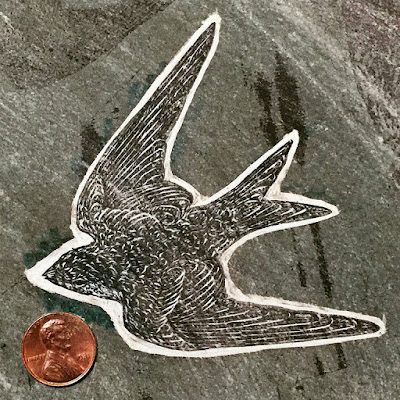 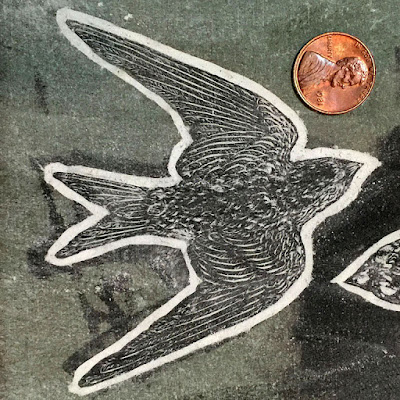 I haven't yet proofed the latest ones (#5-7) - now that the block is filling in a little, I don't want to ink over the remaining templates until I'm sure of where I'm going to put any remaining birds. I did proof the the larger ones (#2-4) and am happy with how they turned out. 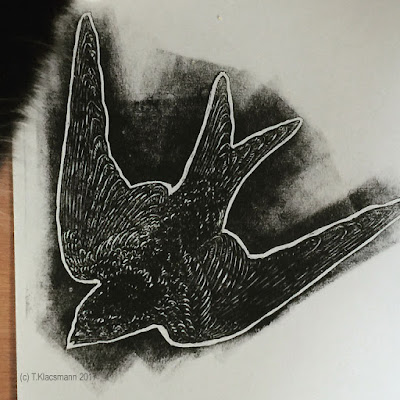 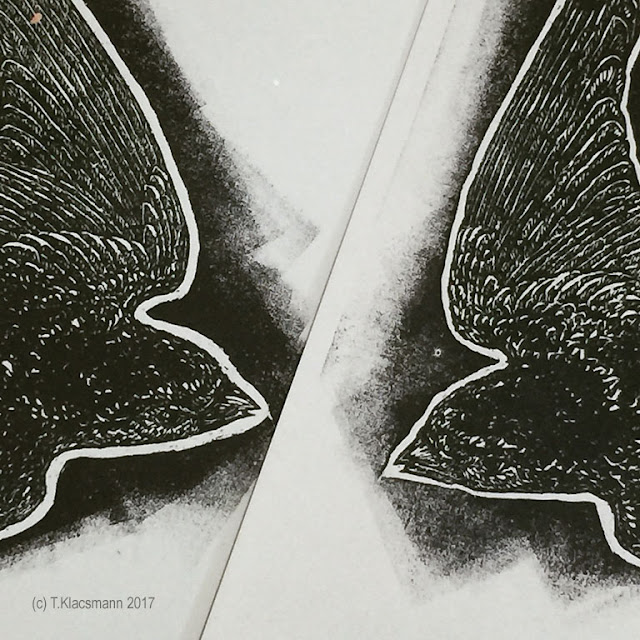 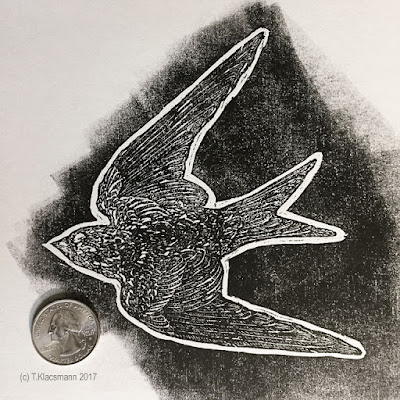 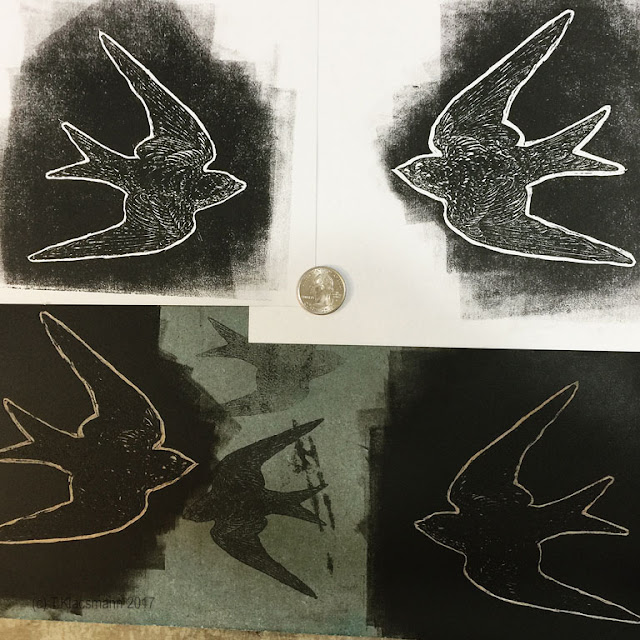 I've also been thinking about the cloche element, which I will need to start carving soon.  Last time, I mentioned finding swallows in Michael Wolgemut's Schatzbehalter der wahren Reichtümer des Heils, from 1491 in the Garden of Eden in an Expulsion from the Garden scene. I was speculating on whether that had symbolic meaning. If swallows are the birds that always find their way home, then their presence in the scene of Adam and Eve being kicked out of the Garden might be a symbol foreshadowing redemption/return to paradise. If the presence of the swallows does have a broader symbolic meaning, I would expect to find them in other Garden of Eden scenes.  So I did some digging...
This is a print I enjoy from Antoine Verard's illustrated Bible, published 1517 in Paris, which is part of the Rosenwald Collection in the Library of Congress and available for view online.

And if we look closely...see curved wings and distinctive forked tails? Interesting.  (Also, I think this beautiful close up does more than my words to show the value of digitizing historic works for study.) This got me thinking about the cloche and it's base.  Initially, I wanted to put a carving of my house in the cloche - building from the symbolic association of swallows and home, but these pictures of Eden have me thinking that maybe it could be a little less direct, that home could be a memory or idea of home. Then, isolating it in glass works well since it's impossible to ever return to a place in time - it's a memory, there, but not there.  So I did some photographing of my parents house, where I grew up, and may look at working with that instead. So far, the plinth for the cloche has been a sort of non-element, but I think it might be interesting if it were a tree stump - a reference to the tree of knowledge and giving tree. (Hmmmmmm.)

Goals for next time - finish and proof the swallow block, make the block for the cloche, find a suitable cloche and figure out the base.