An exciting new project in the works!

I will be building a site specific installation piece for an exhibition, opening January 2018, "10 Artists/ 10 Objects" at the Hotchkiss School. The exhibition will focus on historically significant objects from the school's permanent collection and how they can act as catalysts for working artists.

from Birds of America by John James Audubon, made available by the Audubon Society: http://www.audubon.org/birds-of-america/alphabetical

As I develop the installation piece, I'll be documenting my process in real time so that students and anyone else who may be interested can follow along as it develops.

This entry will cover the initial steps of the process - selecting a subject, sketching the initial concept, visiting and documenting the site, gathering materials, and researching iconography.

The first step was saying Yes! Curator of Special Collections, Joan Baldwin invited me to participate, and I really like the concept of building new works from historic objects in an educational setting. After confirming that a number of logistical factors are in line: the cost, proximity to home, timing, and time commitment, I said Yes!

The project got off to an auspicious start when I saw that one group of objects from the permanent collection includes Audubon's swallows, specifically the barn swallow and the cliff swallow, as well as the American swift. 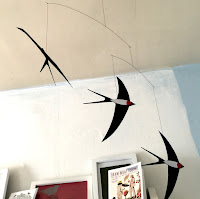 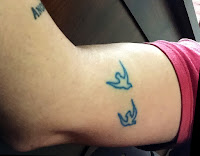 Synchronicity! I love Audubon's swallows - my first tattoo is partly based on them, and so I feel like I have a personal relationship to the artwork. I also live with swallows on a daily basis since one of my "favorite things" in my house is a swallows mobile that lives beside my bed. (This is actually the second swallows mobile.  The first one was near the foot of the bed until Mini, a.k.a. feline assistant Jr., showed me that, when sufficiently motivated, she can balance on the rail of the iron foot board of the bed and take a flying leap to "catch" the paper birds - doh.)

Having said Yes! and requested and gotten the go ahead to use the swallows as inspiration, I drew up a sketch.

(Disclaimer!) I usually don't show my sketches because they are mostly reminders to me of the piece as I see it in my mind.  So I see the piece in my mind, then make a sketch as a form of note taking to remind me of the idea as I imagine it, as opposed to working out or planning the piece through sketches. Since they aren't intended as part of the finished pieces, if judged as artworks, they're disappointing; but, for the sake of transparency, I'm including the sketch here.

The plan is to make a flock of swallows in flight.  They will be largest in the center and then get smaller toward the ceiling and floor as a way of stretching the vertical space. Each swallow will be suspended and on the back will be a colorful repeating pattern with metallic elements so that, as they sway and spin in space, they create a sort of kaleidoscope. At the base will be a cloche containing a house with landscape elements.

In making the sketch, it was helpful that I know the space well and have worked with this iconography before.  Mini #4 (August 2011) is a jar with a microcosm of a landscape with tiny paper swallows on a string (very, very tiny swallows.) 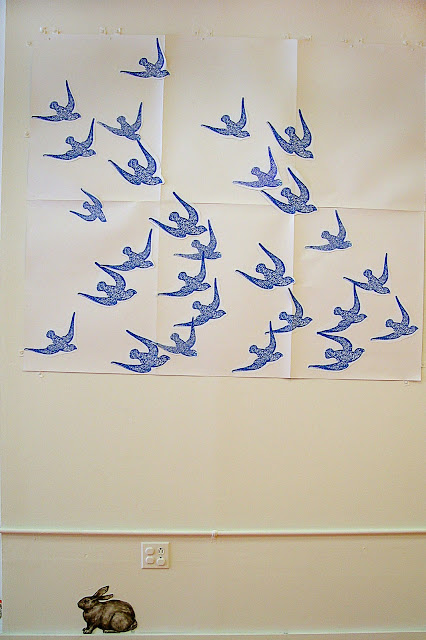 I worked with swallows again for a solo exhibition in July 2013 where I made a flock of swallows in flight with my face sewn onto some of them.

The plan for the installation combines some of the features of the previous work - the idea of the glass jar with suspended swallows and the idea of flocks. The idea of mobiles with patterned backs was something I attempted more recently with flying rats. I made a piece but ended up editing it out of a solo exhibition last year at the Gertrude Herbert Institute because I felt it wasn't a good fit with that show, where all the other work was 2D. (I'm excited to have an opportunity to focus exclusively on a 3D piece this time.)

Some other things have changed since the earlier swallow pieces I've developed better relief carving and digital skills. For this pieces, I'll be carving new blocks and relying on tech skills to make templates.

I checked in and shared the sketch. Once I got the go ahead to develop the piece and helpful feedback about the space and options for hanging, I made a site visit.  There were a few goals - to check out and photograph the space, discuss the installation logistics, and see the Audubons in person. I took measurements and got very useful information about the hanging - which will impact how I structure the piece, but the part I was by far the most excited about was seeing the prints in person and having the opportunity to photograph them.  Prints are often kept in drawers to protect them from light damage, so I was excited for the opportunity to see them up close and photograph. I'd studied these images for online, but it's just not the same as seeing the originals, and being able to get up close to them. 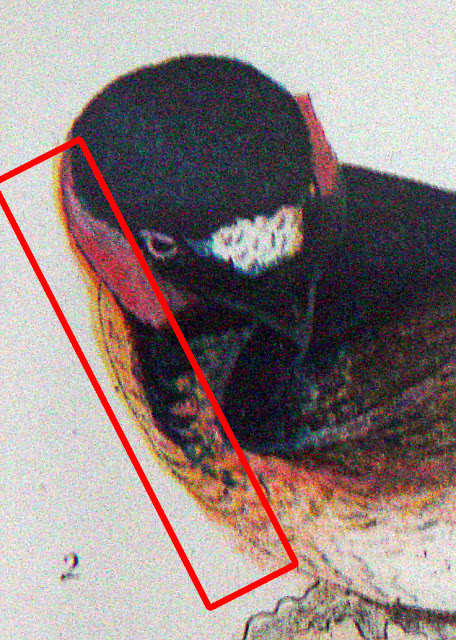 The funniest part to me is the way that, in the originals, it appears that the registration - the lining up of the different layers of printing are not quiiiiite perfect (see one of my photos with an added rectangle to highlight what I mean). I really like this because it's not something I probably ever would have detected without seeing them in person. Also, it's a funny reminder of the way the status of art objects can change over time - when these were initially printed, they were one print job among many that the printer had to get done.

Joan Baldwin also graciously pulled a more recently editioned printing of the same image.  The more recent print shows the colors as they would have looked freshly printed, and it was interesting to be able to compare the two.

It's hard to explain exactly why I want to see and photograph the originals, since, in theory, I could work with online images. I think the most straightforward way to explain is to say that the piece I want to make isn't about the images of Audubon's swallows but about the experience of seeing those images.

Normally, before starting the blocks, I'd be doing more research about the history of the symbolic meaning and use of the iconography. However, in this case, I've already done most of that research (um, before I had it tattooed onto my arm O:) ).  Swallows are the birds that always find their way home, and they have a role in traditional tattooing for sailors. Also (like swans) they mate for life so have additional significance as a sign for devotion and loyalty, or as I think of it, an expanded symbolism for "home" to mean not just a place but including an abstract meaning of "home" inclusive of relationships. With this reading the cloche is a complex element that I'm still thinking about - since the swallows circle the house but don't have access to it - it's an airless sealed off space with the glass acting as a transparent barrier that separates the internal and external world and sets up a dichotomy of internal/ external, human/animal, manmade/nature, physical reality vs fantasy.

Next steps:
Obtain the necessary materials - I'll be doing this in rounds so that it doesn't become overwhelming: first the prints, second the sculptural aspects.  I'll also need to make some decisions about the feather pattern, colors and tail shape of the swallows. Then I'll prepare the source material and make templates to transfer onto the blocks.