In terms of equivalent exchange, I got to thinking about the owl and parrot series from the last two weeks. To make them, I let go of the idea of editioning, creating a standardized group, and instead focused on getting images of the birds. Since I'm aiming for "between-ness" in the tension between general and specific, I accentuated their individuality by cutting them out and putting them each in a similar, but unique collage. Hmmmm.

So I started asking myself:
Are there other aspects of arting that I could let go of in exchange for something that might work better? 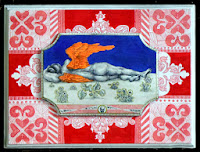 1) I made my very own "blue screen" by painting one wall of my studio bright, cobalt blue (inspired by the Scrovegni Chapel and building from this small piece,  Neo-Gothic (Iris) that I made in June and showed at the National Association of Women Artist in July). My plan is to wall mount the large-scale collages without making individual backgrounds for each one. Also, it's great for photographing.

2) I've been frustrated by the glue in recent pieces. I finally accepted that there's nothing wrong with the glue, it's more that I'm just not good at using it. So for this crown of flowers,  I tried using gold silk thread to attach the parts. It's sturdier and more dimensional than if I'd used glue. Most of the thread is hidden by leaves and petals, but where it does show, it adds a shiny accent of embroidery (thumbs up).

3) For a while now, I've been thinking about making larger scale figures that are not as based in self-portraiture. I finally decided to give it a try.

(drumroll...)
Flowers in her hair and possibility in her hands, the world as wings and a dress of stars; blindfolded, she doesn't see the present, only imagines the future - Beautiful. Absolutely. 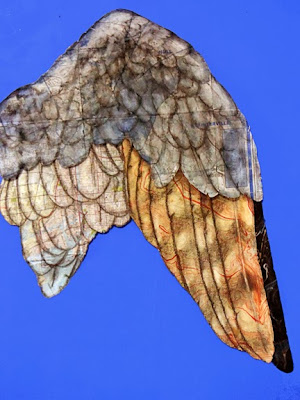 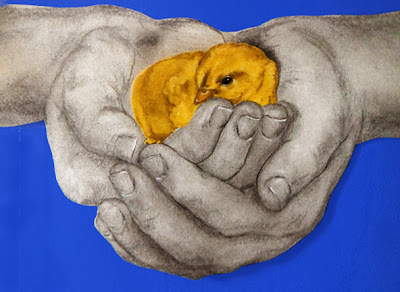 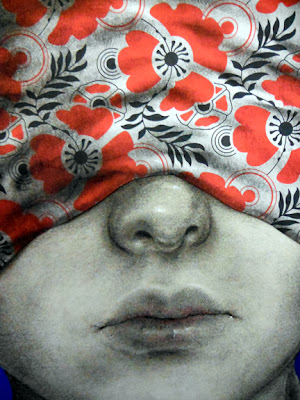 I don't want to jinx it (miles to go...), but my hope(!) is that I'm making something real and too beautiful to be consumed by Irony without a little hiccup ;).

And that concludes entries for 2013! Thank you for reading a happy, safe, art-filled New Year to all!
Posted by TKlax at 7:41 AM

This week I spent a lot of time researching.
I had a grant application due (submitted - thumbs up!)...which meant a project proposal...which meant having a (hopefully coherent :)) project to propose...and hence - research.

Shifting gears from one project to another tends to be challenging for me. There are so many things I want to make, but I find that to direct enough energy toward making something significant, I basically have to put on "idea blinders" and let go all but a few of my schemes (exchange!) I want to chose carefully, so I started sifting.

I started with something I've been thinking about from Eros et Thanatos. The installation relates to Mille Fleure tapestry design, but looking at the photos of it installed, I want to try something different in terms of the relationship of the plants and animals to the background. Also, I've been ruminating on the relationship of text to artwork. Those things led me to think about "Gothic things besides tapestries which include Mille Fleure and text," which led me to the Visconti Deck (Mmmmmmm).

So I started researching tarot decks - I never knew that one of my favorite artists, Mantegna, designed a tarot deck (gorgeousness).

His technique in these reminded me of another one of my favorite artists, Schongauer, who often worked in series, including the "Wise and Foolish Virgins."


The "Wise and Foolish" got me thinking about "Virtue" and "Vice," so I looked up Giotto's "7 Virtues and 7 Vices."

Which got me thinking about Botticelli's "Fortitude"  which is also part of a "7 Virtues"  set.

Then I started thinking about less literal allegorical paintings and I thought of these small panels, attributed (with on-going debate)to Giovanni Bellini, of which my favorite is Fortune.

The presence of the two water jugs brought me back to the tarot.

After all that, what did I learn?
The more things change, the more they stay the same? haha!

And that, tolerant reader, is how I ended up writing a grant proposal for support to make life-sized interpretations of tarot cards (hopefully I justified it much more elegantly in the proposal - fingers crossed!)

There was also a section in the proposal about fractals...

In other art news, I made parrots 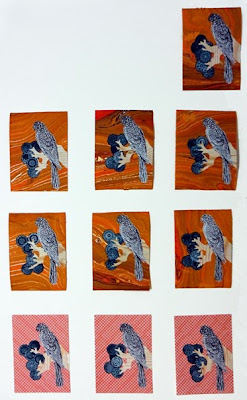 
I don't know what I had thought I would be doing this week, but I didn't realize it would involve this many owls.

It all started with last week's turtle cookies. I really really wanted to make the turtle cookies. At first, I thought it was just a diversion or a "creative outlet" while I'm doing some research in the studio, and I sort of ignored it for a few days. But the thought kept coming back, so I gave in and made a special trip to the store for ingredients and made the turtles...and still...there's just something about the turtle cookies (beyond the "cute and yum" factor). Then I thought back to the diagram: Love (Action) Devotion, and it occurred to me - devotion is a repetition with variations...and so are the turtle cookies. If what I'm trying to show is devotion and the overlaying of general and specific - maybe instead of making lots of different animals, I should make the same one over and over again and show how each one is unique... 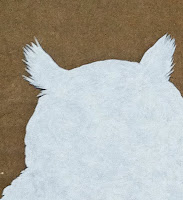 1) carve linoleum block (oy! fortunately, no blood was shed - thumbs up! I must be improving :))
2) print it (gave up on keeping the paper straight or inking the plate evenly, and decided to focus on just trying really hard to get the owl part right)
3) cut them out (I got a little carried away here, but the ear feathers are just so much fun)
4) draw in the eyes with gold (using 3 different golds to create visual depth)
5) cut out the backing paper (I love, love this blue marbled paper)
6) design the branches, create stencils, cut out
7) stamp the leaves, cut out 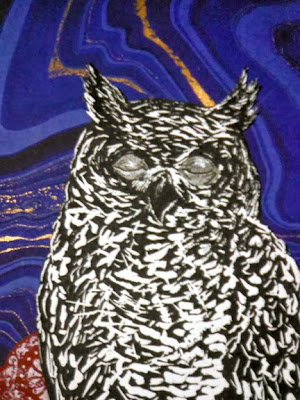 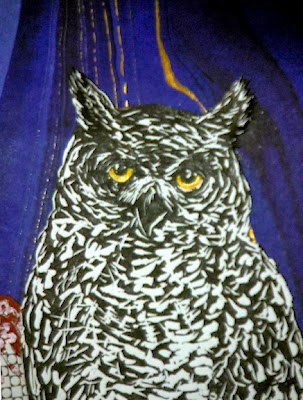 In other art adventures: I made an orange pony

The first law of equivalent exchange is a principle from (animated ;)) alchemy that says nothing can be gained without a sacrifice of something of equal value.

I've been admittedly lame when it comes to discussing anything beyond the technical details about constructing Eros et Thanatos. I'd like to talk about the meaning, but I can't see past the expenditure of energy that went into making it yet.

To put it another way - I feel like the main character in Gattaca who when asked how he won a swimming race with his genetically engineered brother answers that he didn't save any energy for the swim back.

So, I'm going to do what I usually do when I get lost for words and bail out to a picture ;).

To make it real, I had to give it part of myself (for example the figure wears a threadbare bracelet of broken wings - the crown is beautiful, but an illusion; the bracelet is tattered but precious and real).

I think the almost unrestrained outpouring of energy led to the piece I'm working on now, "Amantes sunt Amentes" (Those who love are insane).

Trying to think through the relationship between love and art is a major component of Tempus Fugit, and I've been wondering, if love is a choice? Hmmmm - not sure, maybe not, but I think devotion is. To me, devotion is love that's expressed through action over the course of time. It seems like the two are (alchemically) related. They have "equivalent mass" - love is unified, but abstract, while devotion is diffuse but concrete (and I made a pink diagram to illustrate - fun times:)). I think freedom comes into play as the decision to take action and translate love into devotion. 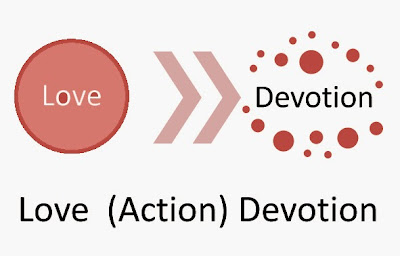 I've been dwelling on this a bit. Sometimes, it seems like I put so much energy into making things that there isn't a lot left over, and the result is "not-wanting-to-leave-the-house-ness." (This cartoon by Schroeder Jones is a humorous and, I think accurate, depiction of social interaction for an introvert.) It's taken a little while, but this week I've been starting to slowly venture out in my hamster bubble again.

In trying to "grow back" the energy I put into the installation, I've been sticking with the drawing classics. This week's figure drawings:

But somehow...I can't stop myself from trying new art stuff... 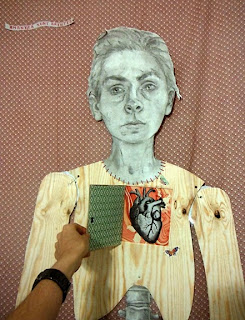 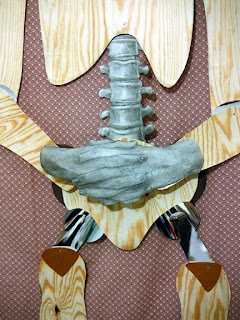 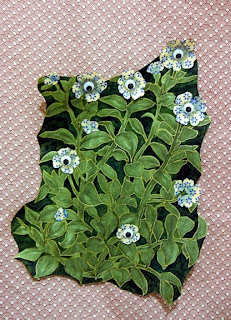 I'm still thinking this one through, but part of the concept for this piece has to do with general vs. specific, and the role that love plays in perceiving details to shift perception from general to specific.  I feel like love is the catalyst that leads one to perceive particularity.

For example, I love my cats. I know when I talk about them to other people, it's sort of boring because to them, Sunny and Mini are not specific. They are "cute cats" in general. But to me, "Sunny" is her double note purr and fluffy ears and paws. "Mini" is playing fetch and running to be cuddled as soon as I stop moving. Because I love them, I like to talk about them, and out of affection for the listener, I want to share their feline-lovableness (I can't imaging that the listener wouldn't love them too if only they had more information). But I also realize that my attempts to describe the lovableness of the kitties will fall short (and yet I do it anyway, repeatedly - we see where the "insanity" aspect comes in ;)).


This is "art relevant" because I feel like "making art-stuff" could be seen as the visual equivalent of"kitty talk," an effort to show specificity even if, ultimately, the attempted description will fall short.

Ok, I think I have reached my art-nerdiness quota for the day - onward...! 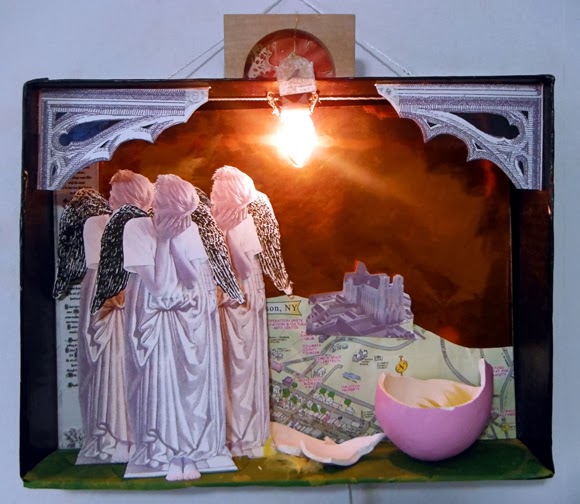 Remember this from last March? It's found a happy place in the Work Show at Gallery @ 46 in Hudson. When I made this, it seemed sort of random, but now I feel like it was a baby step toward low-relief/ wall mounted sculpture (Yay! And, hopefully, more to come...)

In other art news of the week - I was on the radio, as auditory-wingman to my friend, artist Tom McGill! We were guests of Chad Weckler on his program "Art of the Hudson Valley" on WGXC 90.7, to hear: interview)

It was also Winterwalk in Hudson, an annual city-wide night on the town (spearheaded by the Hudson Opera House, who also host the figure drawing sessions from which my drawings come - I heart Hudson Opera House :)).


Last, but not least - cookies. There must be cookies :) I was on the phone for a chunk of time this past week trying to sort out some healthcare stuff (like many, many Americans, I'm sure); so, I decided to make these during the times I was on hold - exchanging time on hold for turtle cookies - Mmmmmmm.