A magical week in Artlandia!  Have you ever wondered what Durer's The Small Horse would look like at unicorn-scale - because I have ;) 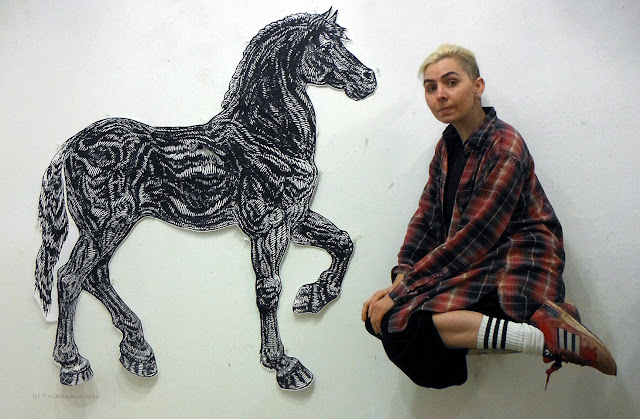 I based "unicorn-scale" on tapestries I saw during my trip to the Cloisters two weeks ago.

I started by carving a full 9 x 12" block. Then I printed it, photographed it, divided it up and printed it onto individual sheets of paper then reassembled (whew!)

The re-assembled version is a good model of the final scale (about 4.5 ft long). I used the model to practice where to divide the image and put the seams so that I can transfer it onto polyester lithography plates and print it on a press in the near future.

While I like the way the body looks - I'd like to carve the head and the hooves (since unicorns have cloven hooves ;) ) in greater detail on separate blocks and the horn will also have it's own block. Much more to come, but I feel it's a good start, and it's exciting to see the model on the wall after it's been in my head for so long [thumbs up!].


I'm working in a gloriously large space at the moment and seemed to have no trouble expanding into it in less than a week - like an art-goldfish, my work grows to the size of it's tank ;)

While it's always jumping in Artlandia, this week was largely dedicated to painful (but mandatory) paperwork (oy.) So while I don't have as many art-things to report as I might like (will try to make up for it next week O:) ) I did manage to squeeze in a little artwork amid spreadsheets...

I signed last week's edition of Fortuna (it's officially complete!) and took some close up shots (with the quarter for scale): 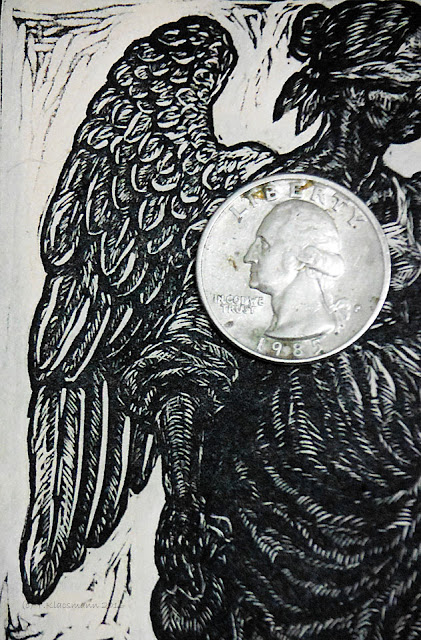 I also made some prints for friends. I tested out a mini block on the press, and I think it turned out nicely :) - one of my favorites of the tinies (sticking with the bunny theme). 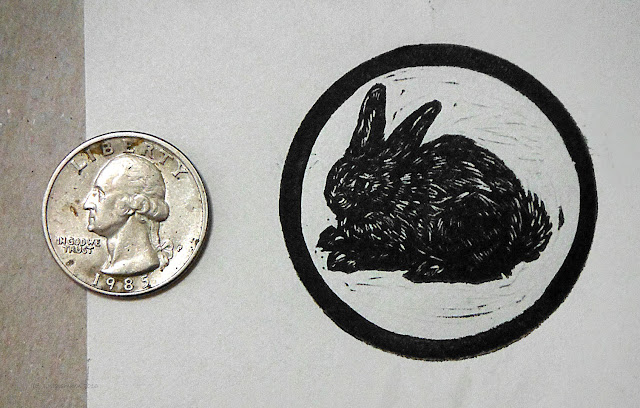 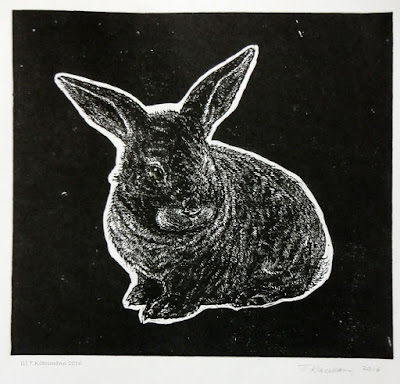 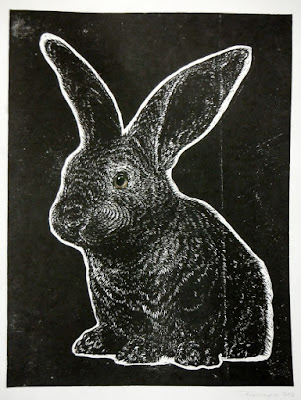 But I also tested out one with collage... 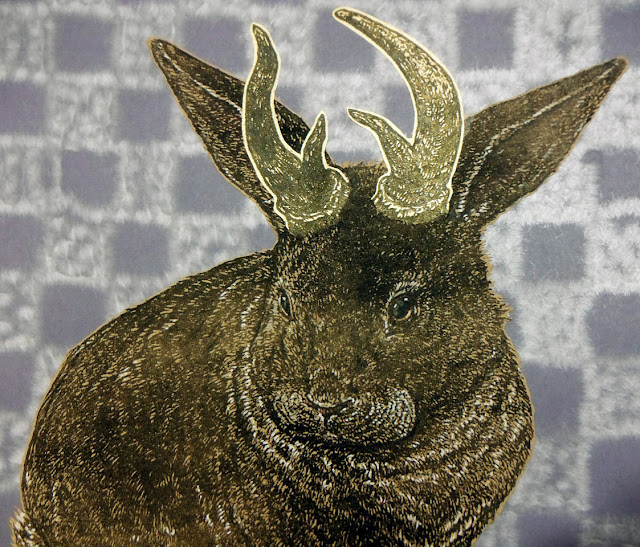 In another experiment, I tried turning a photo of a collage into a polyester plate. This was challenging because the plate is 8.5 x 14" while the image is 12 x 12".  I used a digital techniques (recently learned in an an awesome online course - thumbs up!) to cut the image along a composition division; I then cut the plates and registered them like puzzle pieces...

Some things worked - the seam is undetectable (even to me, and I know where it is - whoop!), but I still need to do some experimenting with preparing the digital image and the ink, press pressure, paper, etc... it's a start!

Pause for a cute kitty moment: I gathered all the house plants together to water, feed and trim, and Jr. was in heaven - stalking toys through her house plant jungle and guarding this new sub-habitat within her domain.

An exciting week in Artlandia...

I pulled my biggest edition to date (16) of this block of Fortuna [thumbs up!]

Some of my favorite decks were represented - cards by Master of the Playing Cards, Master E.S. (both small and large decks), Master P.W. of Cologne, and pieces from the Ambras Court Hunting deck (also called the "Courtly Hunt," ) and the Visconti-Sfortza  deck.

Funny story - over the years, I've referred to all of these decks on the blog. One day a few weeks ago, I wanted to look at one of the deer cards by Master of the Playing cards, so I did an image search. Among the results there was a surprise - my work came up on the first page of search results, not once, but twice, hahahaha!  I tend to think that lots of people love these as much as I do, but it's possible that I talk about them on the internet more than most people ;).

It was a surreal experience seeing all these cards I love in person and all in one place. My photos don't do them justice, but a glimpse of all the beautiful tiny birds :) . The museum's website has beautiful photos and there's a lovely catalog. 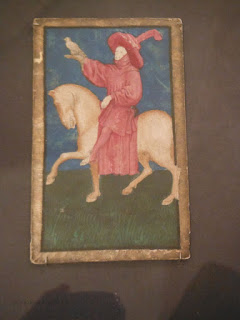 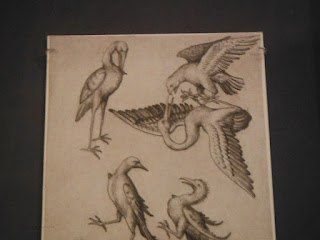 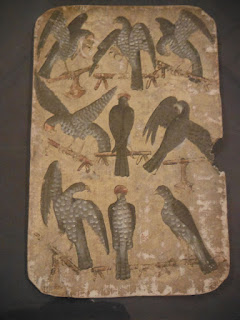 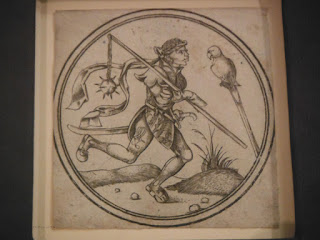 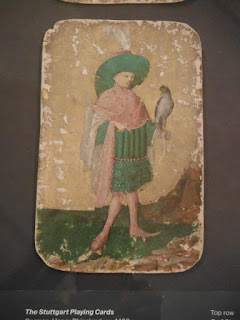 Not only were there beautiful cards, but I also got to check in on the unicorn tapestries - look bunnies! 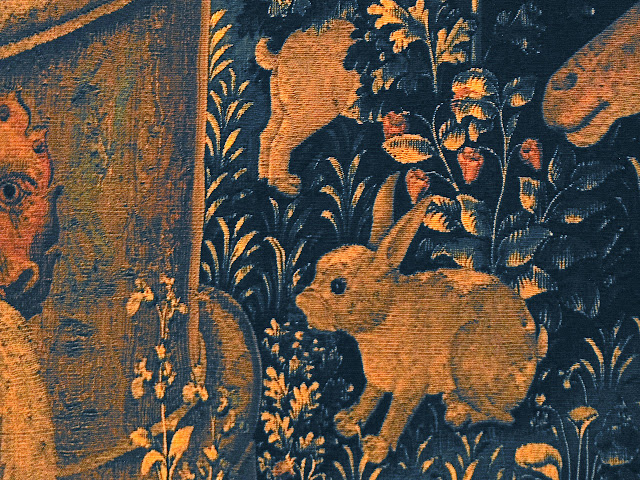 In the park, there were friendly creatures and a helicopter. 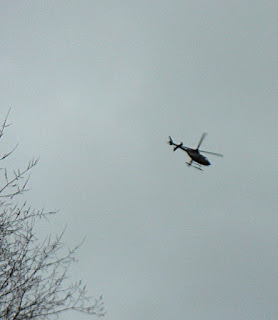 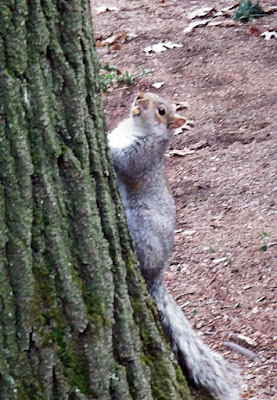 Since I was taking the 1 subway downtown, I made a stop along the way at St. John the Divine.
As a cathedral groupie, I planned my visit for the limited window of time when the light is right to photograph the stained glass.

This time, my favorite piece was "Two Moas," part of a series Extinct Birds Previously Consumed By Humans, by Christy Rupp.

I was lucky to have seen an incredible sea creature skeleton that the artist made out of junk mail gold credit cards at BCB Art in Hudson this past fall. Like that piece, I admire the moas as a tour de force mix of beautiful and disturbing. While I enjoyed seeing the piece in a gallery too, doesn't it look amazing in this space!?!

Now by this point in my adventure, I'd already cried with joy at seeing Master E.S.'s bird card, sat on the bench looking at the tapestries for so long that I think the guard thought I was asleep, camera stalked squirrels in the park in sub zero temperatures, and bounced around photographing all through St. John, and there was still more...

I got to see part of the world premiere of The Most Incredible Thing - a new ballet by Justin Peck, Bryce Dessner, and Marcel Dzama performed by the NYC ballet (!!!!!!!)

Admittedly, I know nothing about ballet, but I really enjoyed seeing Dzama's Une Danse des Bouffons (A Jester's Dance) at David Zwirner in 2014, so I really, really, really wanted to see this, and I'm so glad I did.
I loved the whole thing - my favorite scenes were the cuckoo, or these black and white spiral characters(?), and there were little kids in silver throwing glitter (you know I give bonus points to any artist who can incorporate glitter ;). ) It was like what would happen if the Strasbourg Cathedral clock came to life... in the Factory... to music.  It was awesome.

Searching my memory, I can't think of a comparable experience. I don't remember the first time I saw the Wizard of Oz, only watching it on repeat afterwards. The closest I can think of is the first time I saw the movie Dumbo and the part where the rat falls into the vat of rum (which I didn't understand but found totally fascinating, haha, along with the "Heffalumps and Woozles" song in Winnie the Pooh - yeah, I was a pretty weird little kid ;) ).


I was an amazing adventure. Then, it was time to buckle down and finish editioning the block of Fortuna that I carved in November. I cut this block specifically for a print exchange with my Green Printmaking colleagues, but I've been dragging my feet on editioning it because it's the largest edition (by far) that I've ever attempted. I decided to put it on a very nice kitakata paper (which turned out to be a good decision - thumbs up), but I didn't have a lot (or umm...any...) extra, so not a lot of margin for error. 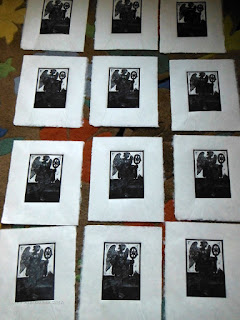 I did the best I could. On the one hand, these meet a base line of printing standards in the sense that there are no fingerprints or stray marks, the margins are an appropriate size, and they're registered straight and evenly across the edition. On the other hand, it was hard to get the ink distribution perfectly even. I used every technique in my tool box to try to get them even - set them under a heat lamp, cleaned the block out frequently, ran the press in the same direction for every print, rotated the blankets, but even so...

I did the very best I could. Since I'm obsessed with repetition with variations, trying to get things exactly the same every time isn't something I do very often, and I know a master printer would have done a far better job than I did.
On the other hand, I'm pretty happy with the carving of the block - especially some of the more technical features like transitioning the figure from dark on light to light on dark while doing the same thing in the background.

This was the best I could do today, and I can't wait to see the prints my friends make for our exchange :)! 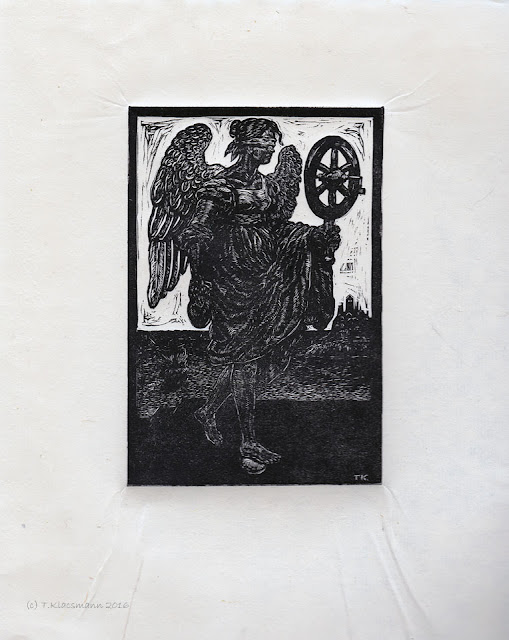 The week ended with Valentine's Day. I got myself flowers, made a pink polka-dotted cupcake (yum), then spent the day printing with my kitties (Ahhhh - it's good to be a cat-lady-in-training ;) ).

This week, I made another bunny :)
Especially proud of this one :)  I also started testing out some refinements and backgrounds: 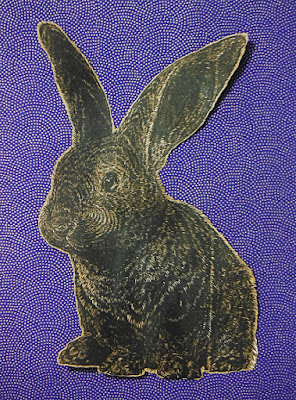 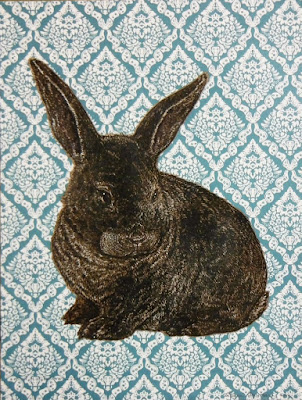 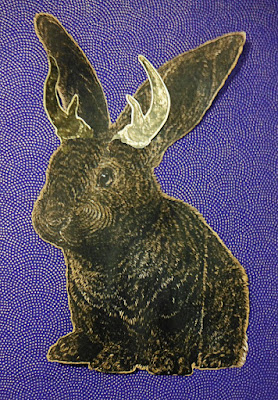 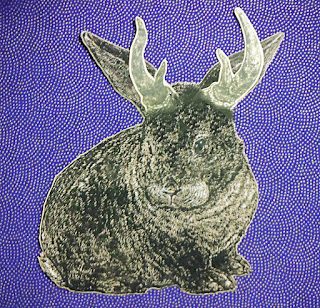 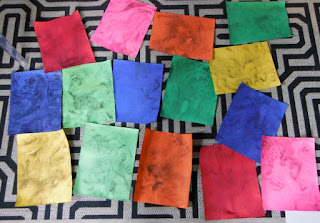 I like the horns...but I really miss the wings, so I marbled some paper and... 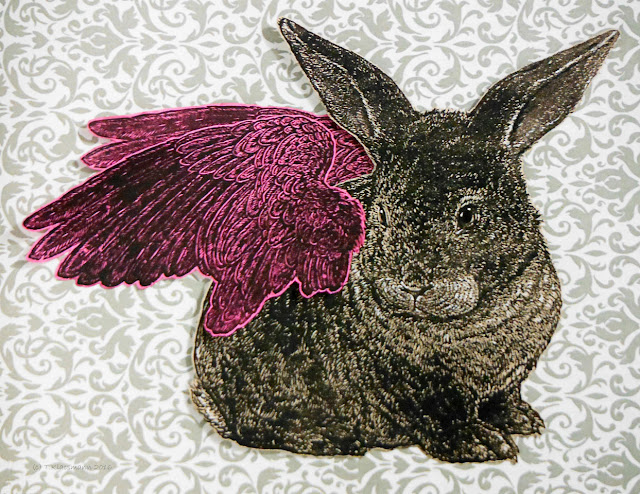 Speaking of wings, I also continued working on the large wings, adding two sections of feathers in the middle (they just keep growing ;) ) I've been thinking a lot about how I want to make the other wing. Until now I've been focused on matching the parts internally within a single wing, but now I'm also starting to think about matching them left wing to right. As I get closer to getting the parts to match, the standards keep going up - for example, I think for the new section (the yellow ones in the middle) the ink is "too black" - I'm still learning to differentiate the different types of black ink.

I could make the other wing right away by using polyester lithography plates exclusively, but since this wing is a hybrid of relief plates and polyester lithography plates, I think that the other wing should also be a hybrid of the same types of plates. Which means more carving...but, I got to thinking that I should carve blocks that are plates in this one - that way there is always a block thats an exact match and I'm only flipping it for the plate (it minimizes distortion because I'm not changing the scale or resolution, just the orientation.) But I think I might also need to recarve the top (blue) section, or at least part of it because its so critical (hmmmmmmm). 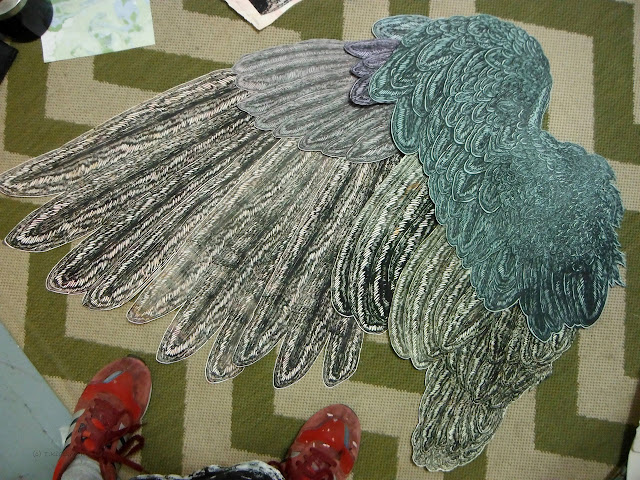 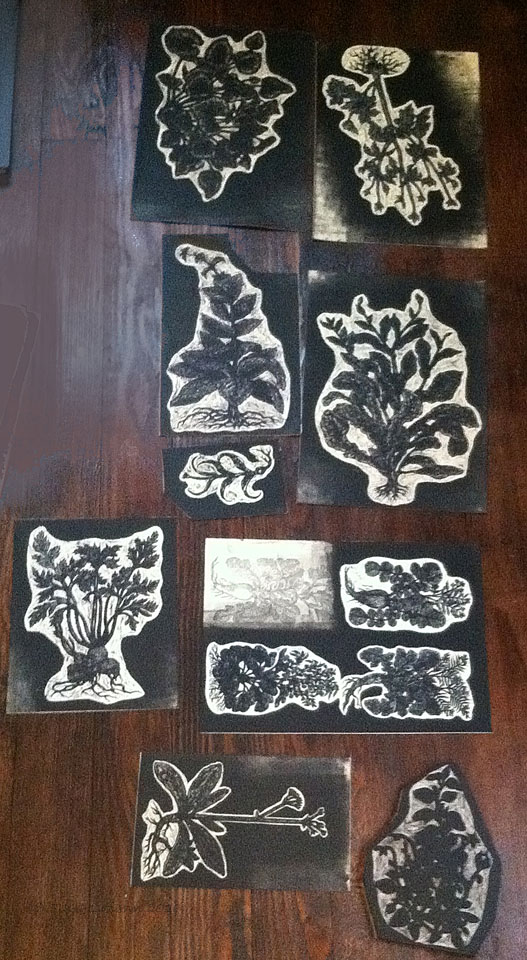 I started using the computer to make variants and put them together, for example 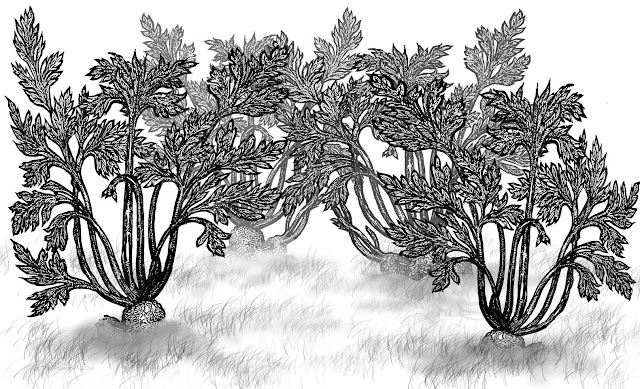 I haven't printed them yet though and I'm curious to see how it will turn out (stay tuned!)
Trying to give those bunnies an art-home. 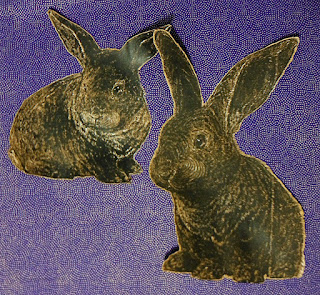